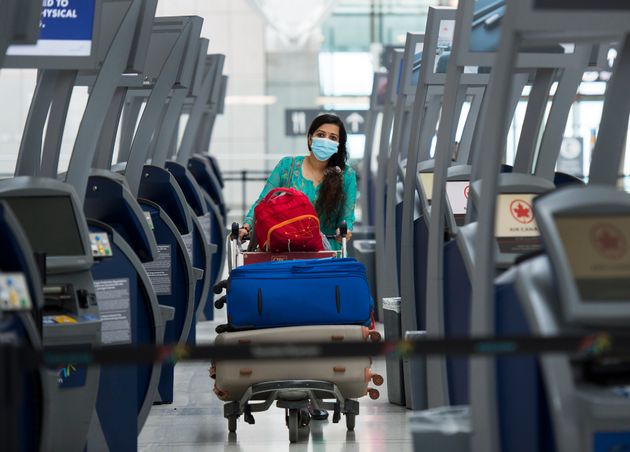 A traveller walks through Toronto Pearson International Airport in Mississauga, Ont., on June 23, 2020. The CRA announced changes to the Canada Recovery Sickness Benefit in response to public outrage over the money being used by Canadians after travelling abroad.

OTTAWA — Anyone applying for three federal benefits will now need to say whether they are in quarantine because they travelled outside the country.

The Canada Revenue Agency (CRA) announced the new requirement following an uproar over the possibility of Canadians applying for the Canada Recovery Sickness Benefit after ignoring public health advice to not engage in non-essential travel.

The sickness benefit pays $500 per week for up to two weeks for anyone who has to quarantine because of COVID-19.

The CRA says it was intended to help frontline workers and others who may have been exposed to the illness but whose employers do not offer paid sick leave.

The CRA says it will delay processing applications to those programs from Canadians who have travelled until new legislation taking aim at non-essential travellers can be adopted.

Remove Loophole From Sick Leave Benefit For Pandemic Travellers : 450,000 applications for the CRSB

The government has approved more than 450,000 applications for the CRSB since its September launch.

The benefit is now under fire from critics who say pandemic aid could be going to Canadians completing their mandatory 14-day quarantine after returning from personal vacations and other non-essential travel.

“These people need an income replacement when they stay home not to go to work to protect the public. It’s not meant to be a bonus for some irresponsible trip you took,” LeBlanc told host Vassy Kapelos.

The minister said his government understands public frustration with people claiming the benefit after returning from unnecessary travel abroad; he called it an “abuse” of the benefit due to a “loophole” in the rules.

LeBlanc said his government does not have a firm number for how many Canadians improperly claimed the benefit. The number, he said, is “probably a very small amount, but one is too many.

“We’ll ensure that that loophole is plugged quickly and we’ll have more to say in a couple of days.”

LeBlanc said fixing the benefit “probably” will require legislation. If that is the case, any fix would required the House of Commons to be sitting. The Canada Revenue Agency (CRA; French: Agence du revenu du Canada, ARC) is the revenue service of the Government of Canada. The CRA collects taxes, administers tax law and policy, and delivers benefit programs and tax credits for the federal government and most provincial and territorial governments. It also oversees the registration of charities in Canada.

The CRA is the largest organization in the Canadian federal public service by number of personnel. It employs 43,908 people and has an operating budget of $5.1 billion as of the 2018-19 fiscal year.

During the 2017 tax year, the CRA collected approximately $430 billion in revenue on behalf of federal and provincial governments, and administered nearly $34 billion in benefits to Canadians.

Before 2003, the Agency was known as the Canada Customs and Revenue Agency, and prior to 1999, was organized as a department under the title Revenue Canada.

The economic impact of COVID-19 pandemic resulted in the temporary and permanent closure of businesses throughout Canada, leading to the loss of several thousand jobs. This resulted in the creation of several economic measures targeting different sectors of Canadian society, which the CRA was tasked with administering.

The Canada Emergency Response Benefit (CERB) was introduced as a temporary benefit available to Canadians who stopped working involuntarily due to the pandemic. It provides $2,000 per month successful applicants during the eligible period. However, income earned through CERB is taxable and those who applied without being eligible could face penalties during future tax assessments. Eligible recipients are required to have also earned $5,000 in income during the 2019 tax year, and could not earn more than $1,000 per month when claiming CERB. The benefit is administered jointly by the CRA and Service Canada, with nearly 8.5 million Canadians applying for the benefit. representing nearly 21.5 million unique applications.

Similarly, the Canada Emergency Student Benefit (CESB) was developed as a parallel benefit for high school graduates, post-secondary students, and recent post-secondary graduates who do not qualify for CERB, with a shorter eligibility period of four months. CESB received about 2.1 million applicants, with over 675,000 unique applicants as of August 2020.

U.S. on a federal execution spree and a lone Canadian sits on death row: Robert Bolden’s untold story
Here’s what you need to know about Ontario’s stay-at-home order