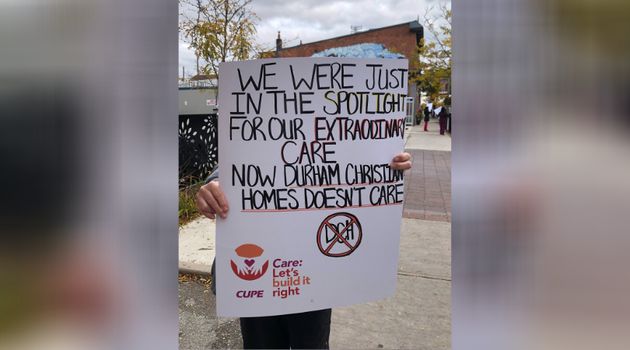 A staff member laid off from a Bowmanville, Ont. nursing home Tuesday after decades of service says she can no longer sleep at night.

“I have given so much to Marnwood. I cried … I’m full of anxiety for myself and for the residents.”

The staff member asked not to be identified out of fear of professional repercussions. She told HuffPost Canada that her employer, Durham Christian Homes, told her she can apply for a new job at one of its other homes.

According to the Canadian Union of Public Employees (CUPE), which represents the workers, Durham Christian Homes laid off 51 nursing staff and 21 workers in other areas like housekeeping from its Glen Hill Marnwood home.

“Durham Christian Homes has built a new facility in Whitby to align with the government’s new long-term building design standards. But instead of honouring its collective agreement … the employer has chosen to lay-off the home’s workers and outsource the jobs of support staff at the new facility,” the union said in a press release Tuesday.

“Nurses and personal support workers will be expected to re-apply for their jobs at the new location while housekeeping staff, dietary aides and other support staff will have no place at the new home.”

Staff who do get new jobs will have to unionize all over again, CUPE said. 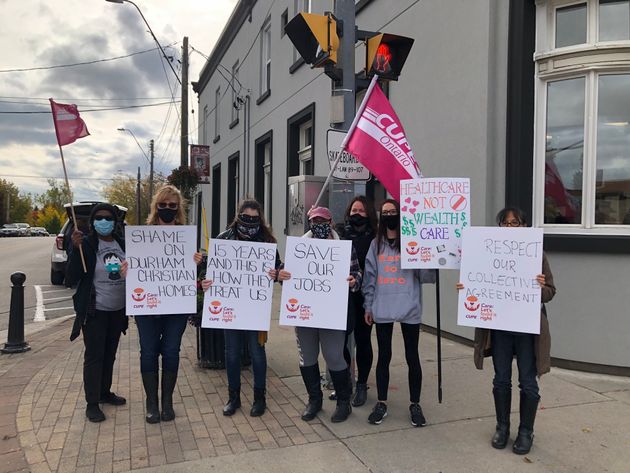 About 50 to 60 people came out to support the workers at a downtown Bowmanville demonstration Wednesday, the worker said. One staffer held a sign reading, “15 years and this is how they treat us.” Another wore a sweater that said, “hero to zero.”

Durham Christian Homes CEO Ruth McFarlane said in an email she could not comment because the company is still negotiating with the union.

The COVID-19 pandemic has brought chronic understaffing and poor working conditions in Ontario’s long-term care homes into the spotlight. Premier Doug Ford has said he knows staff like personal support workers (PSWs) are “overworked” and “underpaid.” His government said on Oct. 1 it would temporarily boost wages for some of these workers by $2 or $3 per hour.

The worker HuffPost spoke to said it feels like their hard work during the pandemic has not been appreciated.

‘We kept our home COVID free’

“It’s just hurtful … All our hard work that we do every single day goes unnoticed,” the person said. “We’ve kept our home COVID free. Not a case. I’m just devastated.”

Sally Barrie’s 95-year-old father lives at Marnwood. She said she was told in early September that he would need to move. She found out Tuesday that the staff would be laid off.

“I could not believe it. I felt that the best interests of the residents there were not considered at all,” Barrie told HuffPost.

“I just assumed that everyone would move intact with the residents … That is so key with long-term care residents, that familiarity.”