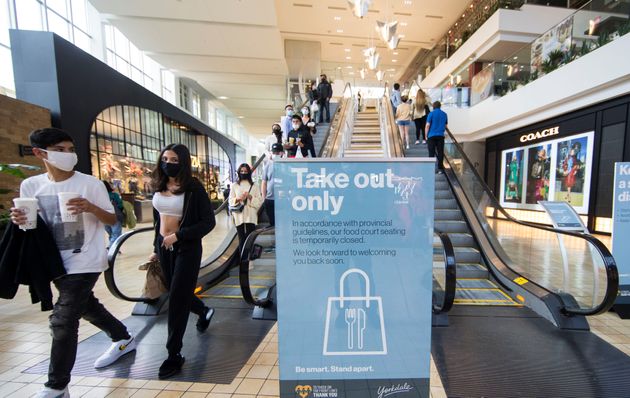 If Canadians want to get back to eating in indoor restaurants and drinking in bars ― as others in some places in the world can do today ― the country will need tougher lockdowns in the short term first.

That’s the prognosis from CIBC’s chief economist, Avery Shenfeld, in a report issued Friday that explored what lessons the pandemic-stricken parts of Canada can learn from places such as Japan, South Korea and Newfoundland, where authorities have been able to reopen the economy to a large extent without a major new outbreak.

In Shenfeld’s analysis, the problem is pandemic-stricken areas are reopening bars, restaurants and similar establishments too soon, allowing caseloads to rise back up again.

“You need to smash the curve before reopening such venues, not just ‘flatten’ it,” Shenfeld wrote. “If community caseloads are at extremely low levels, the odds that the person at the next table has Covid are also very low.”

Watch: WHO says lockdowns should be ‘last resort.’ Story continues below.

The CIBC chief economist’s comments come at a time when a debate has broken out over the extent to which lockdowns are needed as a second wave of COVID-19 hits North America, Europe and other regions of the world.

Two World Health Organization officials recently made public comments that some interpreted as discouraging lockdowns, or at least particularly strict ones.

But Shenfeld argues that once lockdowns have reduced the virus’s spread enough, it will be easier to reopen the economy. That’s because contact tracing ― which can be used to prevent further outbreaks ― is much easier when the number of cases you’re tracing is low. This is why countries in East Asia have had better luck, Shenfeld argued.

“Japan had a breakout (originating in) bars. The difference is they got the case numbers to such a low level … they could keep track of all those people,” he told HuffPost Canada.

At the level of infections Ontario and Quebec are seeing ― hundreds of new cases daily ― contact tracing “starts to get pretty hopeless,” he added.

Shenfeld suggested the current approach to lockdowns favoured by provinces, which is to implement limited restrictions for a set period of time, may not cut it.

“We shouldn’t set a deadline for reopening based on time, we should have a picture of the (level of) background cases in the community that we’ll need to reopen,” he said.

And that means governments will have to keep the emergency funding going ― not just to laid-off workers but to businesses that are facing a very hard winter ahead.

Beyond the rent subsidy for businesses that the federal government has launched, Shenfeld suggested targeted help for specific industries that are suffering and pushed for more aggressive solutions.

“Perhaps take-out meals and alcohol to-go at bars should be sales tax-free? We’ll need to think creatively if it takes longer than a month to unlock this lockdown.”

The economy seems to have recovered noticeably in Q3, after GDP shrank at a record pace in Q2 due to the health crisis. In August, the unemployment rate hit a five-month low, with total employment at just 5.7% below its February level. Furthermore, retail sales continued to expand in July and a flash estimate pointed to another gain in August, hinting at stronger private consumption in Q3. Moreover, both housing sales and prices jumped in August, while housing starts surged to a near 13-year high in the same month, which should have supported residential investment in Q3. However, crude oil shipments by rail were at an eight-year low in July, pointing to a depressed energy sector. In other news, the minority Liberal government announced plans to extend the wage subsidy program—which ends on 21 November—until the middle of next year, although the measure must still secure a majority in Parliament.

The economy is seen contracting steeply this year, as lower oil output and Covid-19 restrictions weigh on economic activity. Next year, GDP should rebound robustly as strong fiscal and monetary stimulus support domestic demand. Future developments in commodity prices pose a significant risk to the outlook. Analysts project a contraction of 6.4% in 2020, before the growth of 5.0% in 2021, which is unchanged from last month’s forecast.